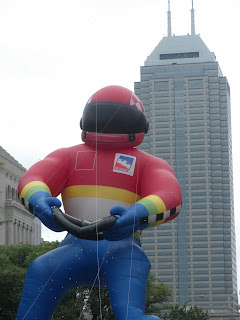 The Indianapolis 500 race weekend is arguably the most eventful weekend in Indianapolis. Large public events share calendar space with more intimate backyard cookouts. Visiting quasi-celebrities give the Indy Star’s Social Scene column material worthy of coverage. The culmination of this pomp and circumstance is the IPL 500 Festival Parade. The celebrities and drivers abandon the hermitage of VIP suites and racing helmets to take to the streets of downtown Indianapolis. 300,000 spectators are on hand to half-heartedly wave to the middle-of-the-pack drivers and scout out the most handsome South American drivers. (Okay maybe that is just me, but I doubt I am alone in this.) 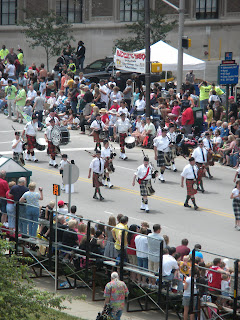 According to my mother, I have attended this parade at least ten times. I wonder if senility is kicking in at an unusually young age, because I thought that this was my second year attending. I will silence this fear and blame it on the monotony of the parade. While it is a wonderful parade and expertly executed, one can only stay interested in a finite number of floats and giant balloons.

Understanding the ephemeral attention span of the audience, Parade officials tried to mix in some unexpected attractions. The Nationalities Council of Indiana contributed a group of people dressed in ethnic clothing. The resulting lederhosen, saris, and hula skirts were a punchy addition. Because the Parade is a family event, many floats played Radio Disney hits and featured costumed cartoon characters. 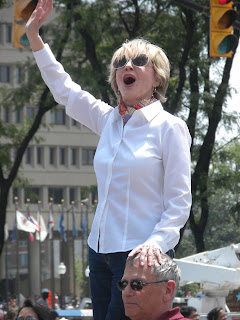 While these attractions broke up the repetition of heartbreakingly overheated high school marching bands, I was most entertained by Florence Henderson. Mrs. Brady is a staple at the Indy 500, singing the classic “God Bless America” at the beginning of each race. I used to watch the Brady Bunch religiously and futilely attempted the perfect swoosh of Mrs. Brady’s hairdo. As such, my sympathetic system kicked into gear once I saw her approach. I whipped out my digital camera with startling speed to capture my former hair inspiration.

As she passed, Henderson was more adorable than ever. While she was pretty darn cute while delivering life lessons in a neck scarf, her Parade appearance topped all else. She reveled in the attention of the crowd and stood up in the backseat of the convertible, balancing herself with the aid of her companion’s head. She  beamed jubilantly and waved more enthusiastically than all of the 500 Princesses combined. 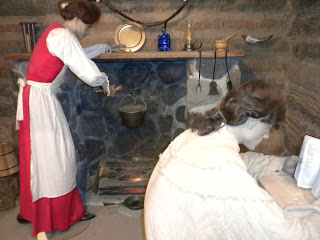 I knew that little could top Ms. Henderson, so I crossed Meridian in order to explore Military Park. The Indiana War Memorial Museum was open and admission was free, so I wandered inside for a bit. The interior of the building is ornately beautiful and the exhibits have been arranged with care. The mannequins were a little creepy, but other than that it was a really interesting museum that, if not for the Parade, I would have never visited.

If you are a history buff, enjoy mannequins and/or architecture, or are downtown, broke, and bored, go visit the Museum!