When ruminating over the magazine article “50 Things Every Hoosier Must Do!” I struggled with the decision of which task to first conquer. I wanted something interesting but not weird but weirdly interesting because (woo!) it’s my first real blog post. Luckily, the calendar dictated my decision. This blog was conveniently founded days before Race Weekend (the Indianapolis 500), a hallowed time here in Central Indiana. As such, the Carb Day concert was the most convenient and weirdly interesting choice for the first entry. 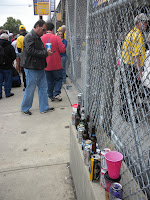 For those unfamiliar with Carb Day, it is an annual event at the Motor Speedway open to the public the Friday before race day. There are multiple events that take place on Carb Day, including:

This is the official calendar, but the unofficial draw is the party. The Indianapolis Monthly article accurately describes Carb Day as “tens of thousands of unwashed revelers converging on the Speedway with beer-filled coolers to jumpstart the weekend festivities.” The mixture of fast cars, booze, and fans of fast cars and booze creates a hectic environment ideal for the best people watching in Indiana.

When I first entered Carb Day, I was greeted by gray skies and an admission price that had doubled from the year prior. I feared that the day would be a disappointment, but I was greatly mistaken. Despite less-than-perfect weather and shameless ticket gouging, Carb Day-goers refused to let the situation get them down. 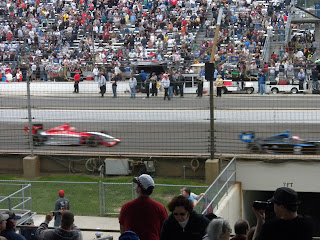 Once inside the gate, my friend and I entered the stands to catch the beginning of the Firestone Freedom 100. We awkwardly squeezed ourselves in front of two hardcore racing aficionados in order to obtain enviable third row seats. Despite our unparalleled seats on the start line, we quickly lost interest. Yellow flags ordered a lowered speed limit, and after maybe seven laps we left in search of more engaging activities.

After leaving the stands, my friend and I ventured to the infield, the core of both the track and the Carb Day festivities. Immediately we were greeted with drunken frat boys chanting as one of their peers downed a beer with the aid of an intricate apparatus that looked fit for a science lab rather than a racetrack. I knew that it was going to be an unusual day. 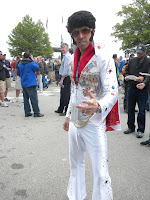 Beyond the beer chugging, a slew of characters made for prime people watching. The array of mullets, Mohawks, tattoos, and jorts pair nicely with greasy food stands and an overriding scent of sweat. Carb Day is a time when people put away their inhibitions and unabashedly ignore style mores that bind them on an everyday basis. The results are oddly fascinating.

Beyond people watching, the primary event of Carb Day is the concert. When I attended, Papa Roach opened for Staind. I am not a fan of either of these bands, but at Carb Day this does not matter. The bands chosen are always popular enough that everyone in the 40,000+ crowd can embarrass themselves by singing along to the band’s oft-forgotten but inexplicably-remembered radio hits. 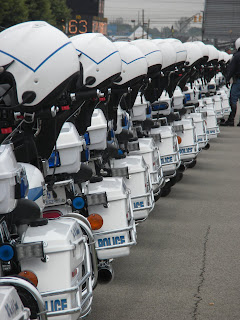 This year, the concert got a bit rowdier than usual. A few concertgoers threw full cans of beer onto the stage while Papa Roach performed. IMPD police officers fired pepper pellets into the audience in order to keep the crowd in check. According to the Indy Star, Papa Roach vocalist “taunted the authorities by requesting that they fire a ‘paintball’ to his chest.”

Luckily I did not encounter this first hand. I opted to remain on the periphery of the concert in order to avoid the numerous flashers. I do not regret this decision at all, and recommend it to anyone who attends the concert.

Carb Day 2011 was definitely a memorable one. For whatever reason, it maintains its magnetic draw for Hoosiers everywhere and has a long future ahead of itself.