It’s the 94th running of the Indianapolis 500 this year, and I’m proud to be one of the few bloggers they have invited to blog about the race.

I’ve been spending a few days at the track, watching practices, watching Pole Day qualifications, including the new Fast 9 shooutout format, and following the trials and tribulations of team owners like Sarah Fisher, as she tries to balance managing a race team and make the show herself.

When I watch or listen to the race, I’m awash in the history and tradition of it all. From the black and white dogs of the Gordon Pipes Band to the winner’s bottle of milk drunk in Victory Circle, everything we see here is about tradition.

Helio Castroneves is the favorite to win this year’s race, and if he does, he will become only the 4th driver to ever achieve this goal. But his Penske Racing teammates Will Power and Ryan Briscoe both have a shot at winning, as do the Target Chip Ganassi drivers, Dario Franchitti and Scott Dixon. But don’t count out Graham Rahal (Rahal Letterman) and Ed Carpenter (Vision Racing). If anyone can upset the Penske and Ganassi dynasties, it would be these two. 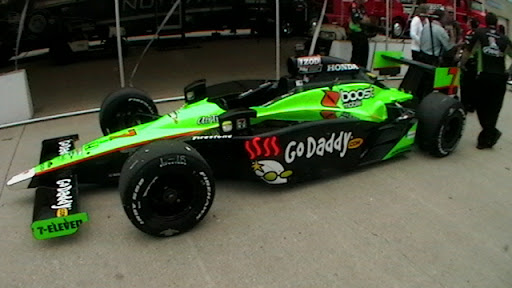 This is also a banner year for women drivers, as four women are in this year’s lineup. That’s over 10% of the starting lineup sporting the X chromosome. While a driver’s gender is still a subject of conversation, I spoke with Ana Beatriz (Dreyer and Reinbold) and Simone de Silvestro (HVM Racing), and they both think this will quit being an issue in just a few years. On the other hand, Sarah Fisher said it will happen when a woman finally wins the Indy Car Championship series.

But I think we’re overlooking the real story here: Bertrand Baguette is only the second Belgian driver to participate in this historic race. Everyone is paying so much attention to the women, won’t somebody think of the Belgians?!

I’ve been able to wander Gasoline Alley, walk down Pit Row, and meet several of the drivers. I’ve even been blogging about the Indianapolis 500 on my own blog, and will be live blogging from this year’s race.

If you’ve never been to the Indianapolis 500, you owe it to yourself to visit at least once. Tickets start at $20, and you can even find space on the infield. If you come out, give me a buzz on Twitter (@edeckers) and let me know. I’ll be happy to say hi.