My Weekend at Bedford's Candlelight Inn

Jenni Edwards is a native Hoosier who currently resides in downtown Indianapolis. Her experience with blogging stems from her job as the Director of Agency Relationships at Compendium Blogware, a software start-up. Outside of work Jenni enjoys attending many local arts and cultural events in Indianapolis, trying new and local restaurants, cycling, running and spending quality time with her family & friends.

After a somewhat later than expected start from Indy and a few missed turns we got to Bedford! In all actuality, it was a pretty easy drive — about 2 hours and mostly traffic free (even leaving on a Friday at rush hour). We made a quick pit stop in Seymour on the way; but wanted to get into town to peak around as soon as we could. This evening was just my sister and I. We live only 45 minutes apart, but probably only see one another once a month or so — some much needed bonding time to say the least!

Once we arrived in Bedford we realized quickly it was definitely a small town! Although we had done our research a bit beforehand, we were still a bit surprised by the size; but it did seem that every corner we turned there was another little shop (it’s full of pet shops, local gyms, antique stores and restaurants). In some ways it reminded us of our own small home town, Pendleton, but it also seemed to have a bit more character — maybe it was the limestone all around? Needless to say, after poking around a bit, we decided to head towards our destination — The Candlelight Inn.

In all honesty, I was a bit nervous for the whole B&B experience — although I consider myself an experienced traveler and have stayed in a few B&B’s in New Zealand, this was different — I wasn’t a student traveler and didn’t have a group of people with me, just my sister. Bed and breakfasts are generally not on my short lists of places to go or stay…but I was thrilled for the opportunity none the less. I had a few questions before arriving…how many people would be here? Who would these people be? Who the heck was running this place? Do you tip? What’s with the shared bathrooms?

As soon as we pulled up, I was at ease — the outside is meticulously kept up and the arts and crafts style exterior was just as it was pictured. We were elated to be at our destination…and as soon as we pulled up we had three adorable dogs to great us (2 Yorkies and my favorite, a long haired chihuahua named Bean) and then came Elizabeth, the owner of The Candlelight Inn, with the best statement of the day “You must be Jenni!” She seemed genuinely excited to see us and as soon as we walked in there was a smell of home. Not my home, not anywhere I had been before — but that cinnamon smell mixed with a worn in feeling (not musty, just lived in). I later found out that cookies were also baking….mmm. Elizabeth is sort of like that aunt you never had, but a bit more perky.

After a few pleasantries we were shown to our room, one of the smaller rooms; but well kept and plenty of room for two. After putting our items away we were famished and headed into the town of Bedford. Elizabeth recommended one of the local Mexican restaurants, but we actually chose a different one (more due to the fact that we are both directionally challenged). After a typical, but good Mexican dinner and a few drinks, we headed back to the inn.

Elizabeth was sill wide awake and was excited to chat about what we were up to the next day — at the time, we had absolutely no plans. We decided on 8:30 for breakfast, a bit early for me — but I didn’t want to waste the entire day. Our plan ended up being Bedford then Mitchell then Orleans. We took several of Elizabeth’s recommendations for places to stop (some of them are spots her friends own). I raved about my hometown (Indy) favorite for antiquing, Midland Arts and Antique Market, as Elizabeth continued to provide her expertise with lunch recommendations.

My sister and I then started to wind down now…we both were chatting about how we felt like we were staying in someone else’s house — but in a good way, the comforts without the obligation. With wifi access, cable tv and a heap of magazines that we brought along we would stay entertained until our usual bedtime of midnight. I feel relaxed and at ease, not uptight like I thought I might. Unfortunately, I had yet to see too much of the surroundings as we arrived past sunset, but was looking forward to breakfast and then some coffee on the porch in the morning! 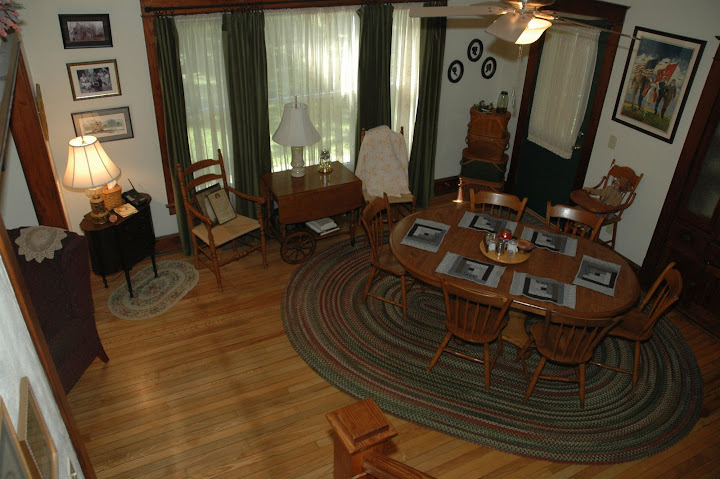 Today was the day for antiquing and Elizabeth didn’t disappoint with breakfast to get us started (eggs, bacon, english muffins). The whole breakfast experience of the bed & breakfast was great – a lot less formal than we expected. After breakfast, we hit the road with Elizabeth’s cheat sheet in hand. It was perfect, we both found a few treasures (vintage housewares of sorts mainly) and stopped for lunch at a local diner. Everyone was so nice the entire day!

At this point, I had to head back to Indianapolis so my sister’s boyfriend came down. They enjoyed the night and the next day’s breakfast all the same as before. There was another couple staying at The Candlelight Inn, but Elizabeth was great at handling multiple guests (I still can’t believe she is “new” at this!).

Overall, I felt more relaxed driving back to Indianapolis and really did get to spend that quality time with my sister so I felt the vacation was a success. I have to admit, this vacation might not be for everyone but The Candlelight Inn is. In better weather it looks like there are several activities in the area that may pique your interests — Patoka Lake, Paoli Peaks, wineries, not to mention the proximity to Bloomington and other Southern Indiana hot spots.

Editors Note: Jenni Edwards won a contest sponsored by Visit Indiana and received a complementary two-night stay at The Candlelight Inn in Bedford, IN. She was asked to write about her experiences on the trip and the post reflects her views. For more information, please refer to our FTC Disclaimer page.