Melinda Cooper is originally from Elkhart, Ind. and now lives in Anderson, Ind. with her husband and two cats. A writer at heart and formerly at the Indianapolis Star, she’s now an intern at Roundpeg. You can find her on Twitter @mindyc05.

I wanted to go on an anniversary trip for our fourth anniversary but I was laid off in July and it just wasn’t practical. When I read on SmallerIndiana.com that VisitIndiana.com was holding a contest for a trip, I jumped at the chance. I started tweeting and Facebooking like crazy.

The trip ended up being postponed due to a last minute booking so we just went – Nov. 2-4. We had just been to Naperville for a conference and stopped in Elkhart to visit my parents and then stopped at our house to check on the cats and then left again for Patoka’s Edge Retreat. So by the time we got there, we were set to relax for a couple of days!

We drove on a gravel road for what seemed like 20 minutes in the middle of the night and it was so remote. Thank goodness for our GPS or we would have certainly been lost at least once. We arrived at the home around 10 p.m. and immediately found the outdoor hot tub. It was so quiet and relaxing. All we could hear were coyotes way out in the woods and the scampering of animals while we sat in the hot tub. When we went inside and looked around the house, we found rose petals to our room!!!!! It was so romantic. And we found a bottle of wine. It was so romantic and nice of the owners to do that. 🙂 It made us happy.

It was crazy to wake up and see what we had been missing! There was a shimmering lake and a forest surrounding us. There were hills upon hills. Even in the morning, it was so quiet. It’s weird not hearing traffic. Usually you have to wake up in a tent to get that kind of quietness. I read a book for a while then we ate some breakfast and headed out to Marengo Cave. 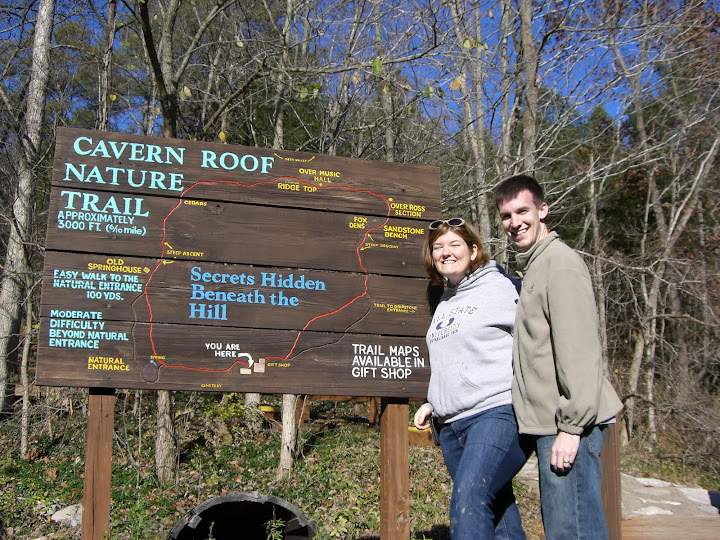 We were the only people there for the tour so we had our own private tour of the whole cave (we did both sides). It was really interesting because I haven’t been in many caves in my life. I didn’t realize how many caves there were around southern Indiana. Afterwards, we went to a newer winery called Indian Creek Winery. It was near Georgetown. It’s only been around a couple years and not yet even on the Uplands Wine Trail so we were pretty excited to find it! They had an amazing woodsy white. And some blackberry wine that tasted like a liquid Jolly Rancher.

After that, we headed back to our house in the woods. The drive in the daylight was so pretty. It was nice riding passenger so I could enjoy the scenic drive. Even with leaves fallen already, it was nice. It’s weird to me to see pieces of rock off the road instead of flat land. My husband is from Cincinnati originally and was making fun of me. But when you come from Northern Indiana, it’s not rocky! So yes, I was intrigued by the granite by the road.

The last day, we checked out and drove towards French Lick to see what the big deal was really.French Lick was a cute small train town with a big casino. We skipped the casino and went to the train museum. And, of course, we found the French Lick Winery. The winery was awesome. The guy working there was hilarious! He had tattoos and this hemp necklace and knew all about wine. It was funny because he seemed more like a beer or Jack Daniels kind of guy but he was so knowledgeable and personable! We had a good time just hanging out with the guy tasting the wines. They had a great dry white and they offered a port sample! Usually wineries NEVER offer port. So I had to try it. The guy explained it as a mixture of almost a brandy and a wine. It made me warm and fuzzy inside. I got a bottle for the winter months! The guy said we should check out some other wineries on our way back and gave us an awesome map so we did. We headed towards Mitchell (the best topography in the state according to my college geography professor) and stopped at Carousel Winery.

The owners were there out in the open! Usually we never catch the actual vintners so it was exciting. They are known for their fruit wines (the other guy said in French Lick) and that we had to try them so we did. I LOVED the pomegranate and Hubby loved the cherry one. They had such unique flavors to their wine. They weren’t too sweet or too tart but they weren’t plain ol’ wines either. And these cookie/cracker things they offer. They are part animal cracker and part oyster cracker. I forgot to get a box. Note to self: find these wine crackers.

Then we went back to Anderson. The cats missed us. I think they are still waiting for us to leave again! Oh well it’s nice to be back to my normally scheduled program again.

Hubby and I would like to say THANK YOU! to Jeremy Williams at VisitIndiana, Pat Coyle at SmallerIndiana and David and Ginger, owners of Patoka’s Edge Retreat for letting us have this wonderful experience!!! (and all our friends, coworkers and family members who had to read my every hour tweets about fall in Indiana)

You can see more pictures from our trip here: http://picasaweb.google.com/mindyc05/PatokaSEdge02#