I took my family to Marengo, Indiana in Crawford County, just a little east of the Hoosier National Forest, and toured the national landmark. 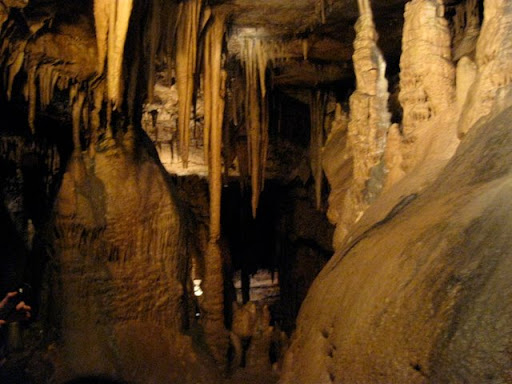 Our guide, Derek, took us to the two caves Marengo has. Our first tour was the mile-long, 70 minute tour through Dripstone Trail, where Derek showed us all kinds of stalactites, stalagmites, straws, columns, and cave flowers. He said we were approximately 150 feet underground.

These rock formations are created by mineral-rich waters dripping from the ground above, and as they land, they leave a tiny mineral deposit. Those deposits grow after a time and created the stalactites and stalagmites and other formations we associate with caves. Other formations are flowstone, dripstone, and rimstone dams. You’ll see all of these on the Dripstone Trail.

I ended up taking over a hundred pictures of these beautiful formations. I’ve posted some photos in Picasa, but you just have to do a quick search in Google Images for “Marengo Cave” and you’ll see more of the same. 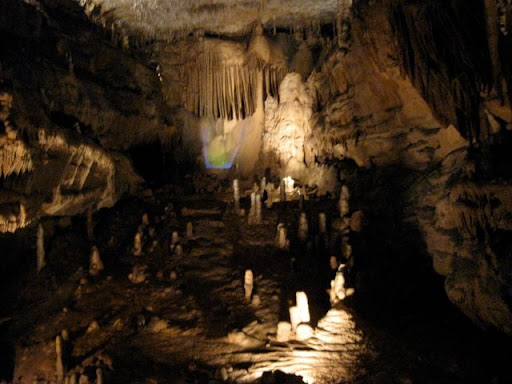 Next, we took a solo tour with Derek to the Crystal Palace, a 25 minute tour that ends in one of the most beautiful cave rooms in the country, filled with nearly every cave formation we saw in our 95 minutes underground.

For those of you who are worried that it’s a messy, muddy exploration, don’t worry. Sure it’s a little damp, but wear some old shoes, and you’ll be fine. There’s no crawling or slipping and sliding through the caves. Everything is electrically lit, and there are even handrails in some places.

There is a third cave that’s accessible only to spelunkers — no lights or handrails, and you’re going to get muddy — but Derek said you’ll see some of the most beautiful formations and Stewart Hall, the biggest cave room in the entire state. One cave explorer, Pamela Emenoil, said it’s “as massive as a football stadium.”

The cave was originally discovered in September 1883 by Orris and Blanche Hiestand, a brother and sister, who lived in Marengo. Four days after the discovery, word spread so quickly that hundreds of area residents were clamoring to see inside. Soon after, the land owner, Samuel Stewart, opened the cave up to public tours. The place has been open ever since. 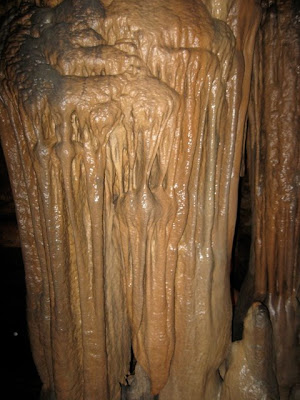 In those 126 years, Marengo Cave has held church services, weddings, and musical performances in the giant room called the Music Hall (a dry room that’s actually big enough to hold a small house).

It’s a popular destination for nature lovers and school groups. When we were there, we counted at least four other school groups from Indiana, Kentucky, and Missouri.

There are over 2,600 known caves in Southern Indiana, and only four show caves in the entire state. I’ve had the fun of crawling in another cave when I was a kid, but they were nothing compared to the beauty and geologic variety found in Marengo Cave. Even if you don’t think geology is that interesting, you’ll be awed by the beauty and wonder of what you see in Indiana’s #1 natural attraction.